Changing the Game with Adthena

In digital marketing, knowing who your competitors are, what they are saying and where they are saying it can mean the crucial difference between succeeding and failing in search. One of our clients, Adthena, allows you to do just that with their AI driven, machine learned competitive intelligence tool! That’s why we jumped at the chance to speak at their breakfast briefing seminar: “Changing the Game: Using Actionable Insights to Get Ahead In Search” on the 8th of November.

It’s the second time they have hosted this event and this year the impressive co-working space Huckletree in Shoreditch was chosen as the venue. My colleague Miguel and I had been asked to attend the special day and share some of our shiny pearls of wisdom that we have been stockpiling over the many years of working in the industry.

The Agenda of the Day

We were sharing the stage with a number of experts in the field and the running order of the day was as follows:

…A number of exciting new feature release announcements from Adthena

When we arrived at the venue we were greeted by Adthena’s marketing manager Lorna Gill who showed us to the all-important breakfast spread! A delicious sight for a pair of empty stomachs which included BLT’s, fruit pots, yoghurts and a selection of hot and cold drinks. But you don’t want to hear about what we had for breakfast!

With our fast truly broken and after some early morning networking, Lorna kicked off the event with a short intro providing an overview of the day before handing over to Adthena’s CEO & founder Ian O’Rouke. During Ian’s talk he provided a snapshot of some of the recent successes and business updates for the tool which included their latest expansion into the huge US market.

Once Ian’s slides had finished it was time for two of Coast Digital’s senior representatives to reveal some juicy search strategies to the eagerly awaiting audience. Our talk showed how understanding your audiences search landscape and your competitor’s offerings can help you build a winning digital strategy. 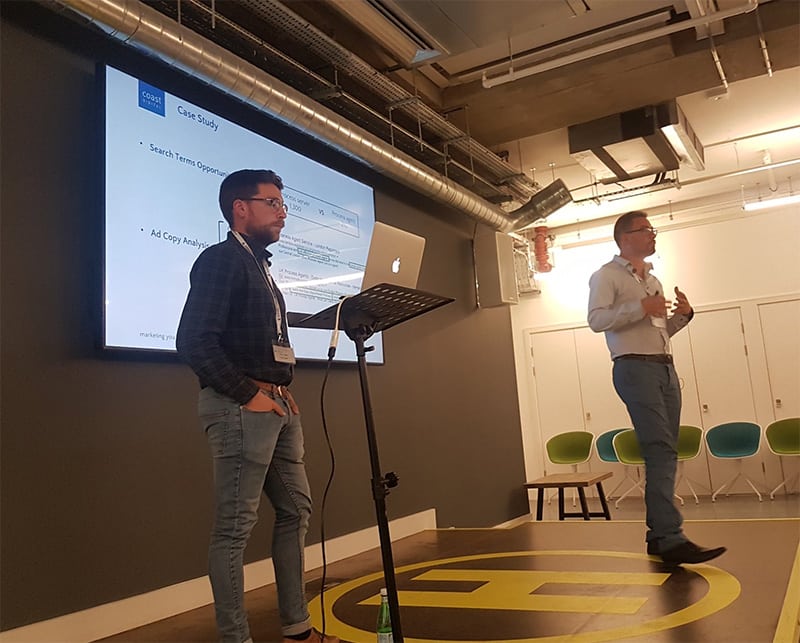 We ran through a case study from one of our clients to show how we used competitive intelligence and a real-world analysis of user touchpoints on their competitor’s websites to formulate a successful digital strategy. This included a revelation we were able to make whereby we exposed a huge gap in our client’s email communications and an example of where their competitors had a massive upper hand over them.

Next up was Tom Fletcher, a PPC executive at Jet2. Tom took us through a case study demonstrating how his team have harnessed the power of Adthena to optimise their paid account and drive some impressive results.

He showed us a number of helpful features including the ability to see your competitors share of voice in terms of impressions, clicks and spend. We also learned how they were able to uncover new search term opportunities and use search term groups to hone in on the exact kind of keywords they should be targeting.

Lastly Tom demonstrated how you can set up automated brand infringement reports within the tool to alert you of any competitors bidding on your terms. This feature even lets you see the specific ads in question, allowing for any official Google complaints required to be made with ease.

Precision Marketing in a Private World

It was Guy Tonkin’s turn next, a PPC Strategy and Best Practice Lead at Resolution Media. Guy told an engaging story about just how creepy and invasive some modern-day marketing techniques can be and how we can use aspects of precision marketing to deliver relevant, less-invasive marketing in an ever more private world.

Some of the techniques he discussed included Uber’s clever use of driver shift times & locations to dynamically post and pause ads based on relevant searches. His talk was particularly useful given the impending GDPR compliance updates which are set to come into effect next year.

Harnessing the Power of Search Term Opportunity with Adthena

Almost lastly but certainly not leastly we had Angelo Di Lascio on stage, Global PPC Manager at Unibet to reveal how he has used Adthena to drive new customers and hit some initially lofty KPIs. Angelo told us how he was tasked with helping to grow the UK customer base and was charged with achieving what at the time felt like some tough milestones.

However, with the help of Adthena he unveiled some previously unknown keywords and was able to see exactly who his paid competition were and what they were doing in order to formulate and execute a successful search strategy, a strategy which allowed him to hit and even exceed the KPIs he had been working to.

…A number of exciting new feature release announcements from Adthena

Actually lastly (but again certainly not leastly) we listened to Ashley Fletcher, Director of Product Marketing at Adthena who revealed some exciting new feature updates to the tool. These included:

With Ashley’s talk over it was time for Lorna to wrap up the briefing for the day. We partook in some more networking and of course, went back to the leftovers from the breakfast buffet. 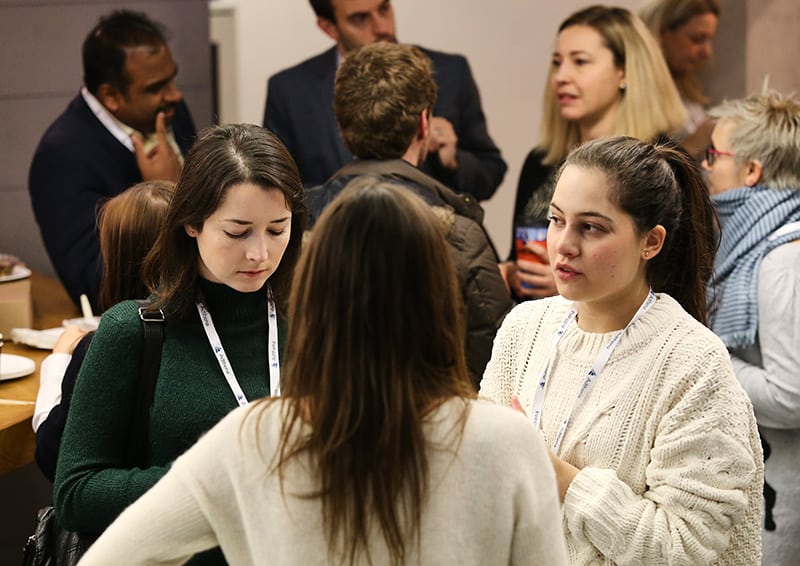 Miguel and myself came away from the conference with some new insights and angles on competitor analysis strategies and both looked forward to the release of the exciting new features from Adthena.