“Focus on the user and the rest will follow”

That’s the first point on Google’s company philosophy under the heading ‘What we believe’. It’s a belief that’s currently under fire from a newly formed group under the name of, coincidentally “Focus on the User”.

This new coalition is headed up by Yelp and includes Trip Advisor and several consumer advocacy organisations. It’s a group that, in the wake of the Europe vs Google antitrust investigation (which for now seems to have quietened down) is putting the spotlight back on the search giants.

For those of you with your head in the search clouds, the European Commission has been pointing the finger at Google for years over its algorithmic transparency and its influence on the European market. Recently the red, blue, yellow and green masters of the internet have been defending their right to display their own content within organic search results, on the premise that:

“if we know the answer, it is better for the consumer, for us to answer that question, so that they don’t have to click anywhere, and in that sense we tend to use data sources that are our own, because we can’t engineer them any other way”

It’s that final sentence “because we can’t engineer them any other way” and in particular the negative definitive “can’t” that stuck out like a sore thumb and prompted Focus On The User to put Google’s money, where their collective mouth is in the form of a chrome extension.

Focus On The User’s particular gripe, is that when users search for a term such as ‘hotel’ they are given what’s called the local map pack. This comes in 3 listing and 7 listing flavours and currently, both are populated with local business listings and Google+ driven information, information that Google’s own algorithm doesn’t favour for that search term organically.

The position of the map pack within the vertical results means that valuable page 1 real estate is being taken up by Google’s own results, forcing other potentially more relevant results further down, out of the obvious view of the user.

For example when I search for ‘hotel’ the first entry in the map pack is for a local hotel that has just 7 Google reviews.

Executing that search to find the same hotel from lets say, the biggest hotel review website on the planet, Trip Advisor, and we can see that unsurprisingly, there are more reviews there, 483 more to be precise.

So what is going on here? Did the local map pack for my search on ‘hotel’  focus on my needs and provide me with the best results for that search? Or, did it simply give me a  list of local hotels supported by Google+ snippets. Would I have found it more beneficial to see Trip Advisor review snippets as opposed to Google+?

My answers are as follows: kind of, yes and yes. Whilst there’s no way for Google to know which location I’m looking to stay in, the purpose of the local map pack is to give me local options. Focus On The User would agree, however they believe that this current paradigm isn’t focussed on the user, pushes potentially more relevant results further down the page into a digital black hole and is only there to serve Google.

Their answer was to craft the Focus On The User – Local extension for chrome, a tool that lets you switch between the current map pack search results and the results that Google’s algorithm would organically provide for that same search. This even allows for the same results that Google previously cherry-picked to appear IF those pages rank well for that search term. Nice and fair 😀

Through testing they claim to have found that the majority of users are favouring the answers provided by the plug-in and say that they have the heat maps and data to back it up.

This certainly raises some eyebrows and seems to support the accusation from the EU that Google appears to be abusing its power and shifting other, more relevant results down the page underneath Google features like the map pack, something that wouldn’t be so much of a problem if the results in the map pack could be more inclusive of other third party driven snippets and results.

With my interest piqued, I decided to investigate the extension and see if any of the claims made were true. Here are my findings.

First, I looked at the current state of play, being a fond fan of a certain six-stringed instrument I typed ‘Guitar’ into Google and hit return, just as expected, within the map pack I saw local business listings for guitar shops, guitar tutors, Google plus reviews and links to their Google plus pages. 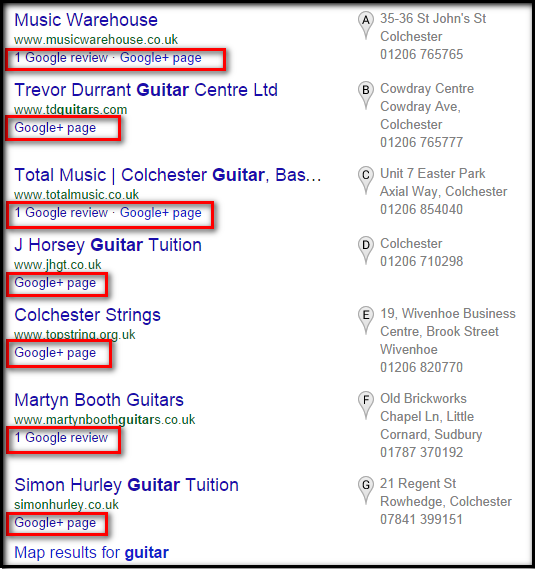 I then headed over to the Focus On The User website and downloaded the widget, dragging and dropping it into the chrome extensions page, as instructed.

I then performed the same search before and voilà, I got a few more options to play with. 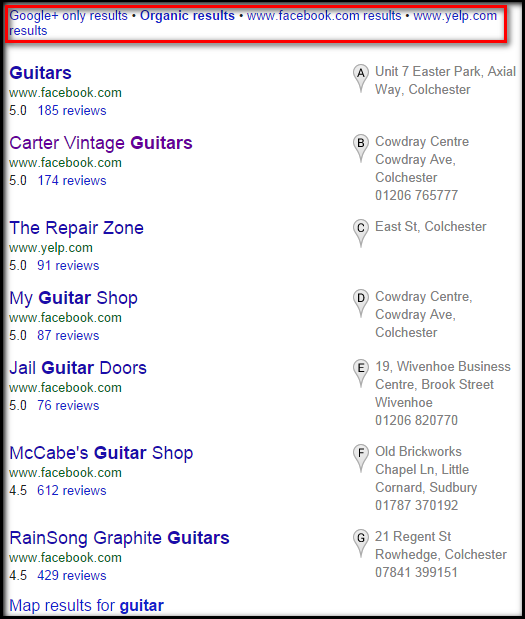 Straight off the bat however I saw limitations to the current state of the plugin. Strangely I found only Facebook pages in the organic results tab. Even stranger was the fact that none of these pages referred to businesses anywhere near me. Typically the FB pages were for amazing looking guitar shops full to the brim with acoustic beauties and rocking’ axes all based right round the corner to me……in the United States.

Clicking on the Facebook results tab gave me the same (funnily enough) and the Yelp tab gave, you guessed it, one very helpful, very non-local Yelp result.

As this is a fairly new tool I put the ‘American FB pages in the organic results tab & unhelpful non-local yelp tab’ debacle down to a bug of some sort and went about seeing if anything different happened when using incognito mode. I headed back over to the extension, ticked the box to enable it and tried the search again, this time incognito.

Thinking I had encountered more bugginess I went back to my previous non-incognito window and tried there.

I went back to my extensions and low and behold, the answer to all this nothingness was staring me in the face, it appeared that Google had kindly un-ticked the enable box for me and removed the ability to check it again (thanks!) Google had also left me a little note to say that it was “Not from Chrome Web Store.”

I got the feeling that I had just been told off and decided to ignore it and try installing the browser plug-in again.

Just like before, it worked straight away, but heading back over to the extensions page, Chrome had again disabled it, leaving me only options to check Permissions or send it to the big digital bin in the sky.

Not one to back down, I continued on with my investigations with a new, mildly annoying “install, search, remove, reinstall, repeat” method.

I decided to return to the search term ‘hotel’ used in my earlier example and there I found what seemed at first to be more promising results. 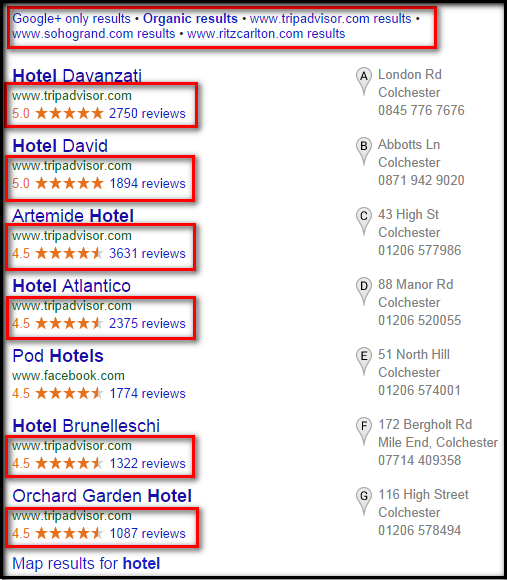 Trip Advisor is a site I frequently use when attempting to avoid a Fawlty-Towers-esque weekend break from hell so the results in this tab looked to be suitable. That is until I actually clicked on one of the results, instantly taking me to the luxorious looking Hotel Davanzati, a stones throw away in little old Florence, Italy.

The same held true for the other results all just a short walk to places like Madrid, San Francisco, Beijing and Jordan. Also present were tabs to display hotels from sohogrand (New York) and ritzcarlton (Barcelona) sites.

It goes without saying that currently, and certainly for me, this extension is not working as it should and it’s worth pointing out that the pins on the right hand side are still showing from the Google+ only results, making me think that all of a sudden a wealth of swanky international hoteliers have brought their business over to my little slice of Colchester!

Regardless of my brief but broken time with the plugin, it was enough to show me the potential that it has and what a fully operational version could provide.

From a personal experience, I can honestly say that either way, this doesn’t affect me too much. The reason being (and this is something that Google tries to drive home in their “We are not the gatekeeper to the internet” statement) is that as I mentioned above, I already use sites like Trip Advisor quite a lot.

When I search for a hotel I might be interested in staying in from a long tail search like “top hotels in xxxxx” or when I’m feeling the pinch “cheap hotels in xxxxx” Trip Advisor is almost certainly at the top of my list.

If a friend recommends a hotel to me, the first think I do when I open Google Chrome, is click on the Trip Advisor logo that I have stored in my favourites bar.

HOWEVER PART 2, THE SEQUEL

Having said that, I know I don’t speak for everyone and different people will have different ways of searching with many relying solely on the results that Google brings to them.

This is where the current map pack is hitting some businesses hard, as they are finding that despite all their hard work to establish themselves on the web and get noticed on Google, they sometimes fall at the last hurdle, only to be beaten by a string of Google+ fed listings at the last minute.

It would be great to hear what your thoughts are on the subject and if anyone else has had any experience with this extension please sound off in the comments section below.

How to Build Your Digital Marketing Toolkit – Coast TV

Why Google Should Reveal Their Algorithm: Arguments For & Against