Social media has long been a misunderstood and underrated part of the digital marketing mix.

Bosses can be understandably reluctant to let their marketing teams invest valuable time in getting to grips with the various social networks – especially when existing SEO, PPC and affiliate marketing programmes demand immediate attention.

With quantifiable ROI being that bit trickier to find, social media often gets pushed to the bottom of the priorities list. But its complementary value to online marketing campaigns should not be underestimated.

Thankfully, the latest survey by Hubspot should give social media champions some hope that opinion is slowly changing. 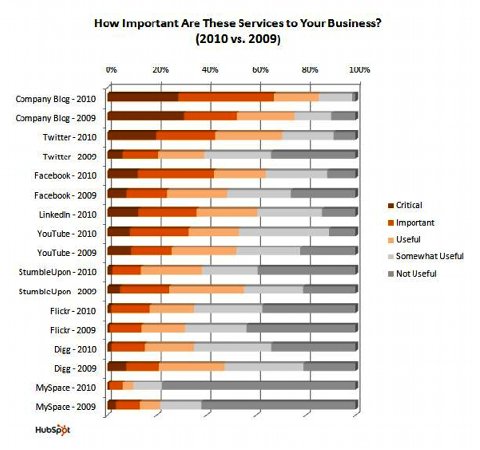 A comparison of 2009’s responses with 2010’s reveals that the company blog remains the most important social media channel for businesses.

I’d hazard a guess that this has as much to do with a blog’s search engine optimisation and PR benefits, as its brand building and reputation management benefits.

Twitter claims the second spot in this survey, suggesting that fewer people take the line that Twitter is simply “not useful”. This attitude looks to have more than halved in the past year alone.

Moreover, it has become difficult for companies to justify their Twitter-shyness when the big boys like Sony claim to have generated over £1 million solely through sales on this channel.

At the other end of the scale, it seems that MySpace’s days might be numbered – as a social media channel for business, anyway. Opinion on its usefulness took another big dive between 2009 and 2010, and businesses believe other social media channels now provide more attractive options for campaigning.

Picking the right channels for you

So where do you start if you want to get stuck in to the world of social media?

It can also be prudent to try out a few of the services for yourself before setting up a corporate account – just until you get the hang of things and are ready to engage with the networks on behalf of a wider organisation.

Get it right, though, and you can soon steal a march on your competitors. Good luck!

How to plan a social media campaign

Google Buzz gets us all waving