Recent posts in SEO forums this week have shown Google is starting to display DoubleClick technology in their AdSense model.

For those that aren’t familiar with news of Google’s purchase of DoubleClick, I’d suggest reading this article.

And below is a screen shot of the source code from a Youtube page and the ‘ads by Google’ source code: 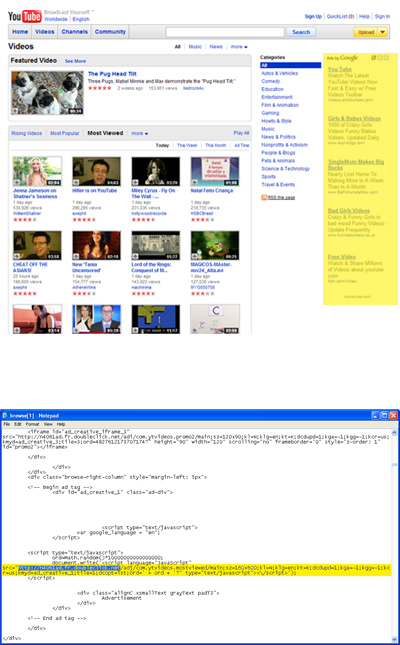 What does this update to AdSense mean? Despite rumours of DoubleClick being re-launched early next year it would seem Google have published the technology pre-2009 to fast-track its progress.

With Google’s recent heavy investment in improving their content network it would seem the future could be bright for those looking benefit from increased display advertising activity.

The much-anticipated DoubleClick technology will be without doubt extremely targeted (the same too with Google’s content network), so this form of online advertising could be a successful medium for many online marketers.

If Google continue to make the content network and display CPC-based, then this will be far more measurable and cost-effective.

The downfall of the content network previously was the ‘step into the unknown’ as far as not knowing where your ads were going to appear.

Now you should be able to tailor your campaigns as much as for standard search bids, with the power of knowing where they will appear, and target positions and select creative accordingly.

We will keep you posted with further updates on the Google and DoubleClick partnership.

SearchWiki & the future of SEO

Christmas shopping – why use the high street?